CU CHI TUNNEL - A HEROIC WONDER
Located about 70 km to the northwest of HCMC, Cu Chi tunnel is the miniature of the creative and transformed battle of Cu Chi people and soldiers in the fierce fight, lasting for 30 years against the aggressors for independence, freedom of the country.
With its victory scale, Cu Chi tunnel went into the history of heroic struggle of the Vietnamese as a legend of the 20th century and became famous in the world. This is a unique and incomparable wonder with 250 km tunnel spreading like cobwebs underground, with the completion of works associated with the tunnels such as trenches, docks, fighting places, tunnels for eating, sleeping, meetings, activities, military, food storage, water wells, Hoang Cam stoves... 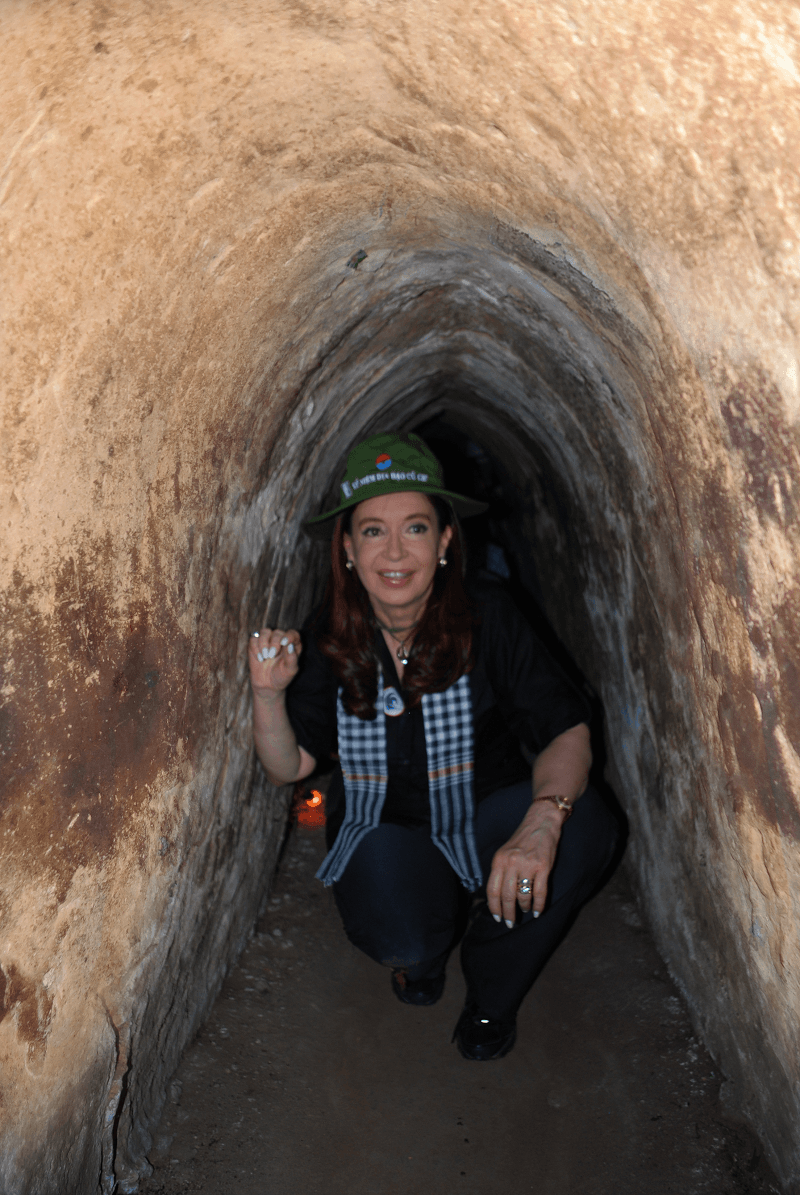 Argentina President - Cristina Fernández de Kirchner visited Cu Chi Tunnel
The real achievements of the tunnel were beyond human imagination. Just going under a tunnel section, you will understand why the small Vietnam could gain victory over the enemy, a big country and the world's richest. Why Cu Chi, the poor land was able to cope uninterruptedly for 21 years with a much larger army, warlike, equipped with modern and updated weapons and means of warfare. In this battle, Cu Chi people and soldiers had gained resounding victory.
Based .on the tunnel system, fortifications, trenches, Cu Chi people and soldiers had fought very bravely, gained miraculous achievements. The US military, for the first time entering Cu Chi had encountered such fierce resistance from the tunnel in important bases that they had to exclaim: “Underground Village ", "Dangerous confidential zone" ... 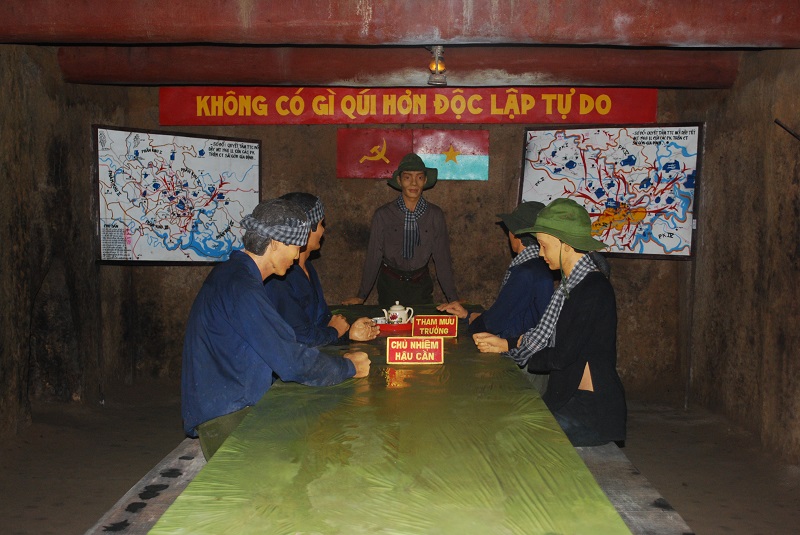 Meeting room of the Command Ministry Sai Gon – Cho Lon – Gia Dinh military zone
UNDERGROUND VILLAGE OF CU CHI
Origin of the tunnel
During these years of fighting against the French (1945-1954), the soldiers hid under the secret bunker in enemy territory, protected by the people. The tunnel secretly constructed in many ways, but mainly underground, .only .one cover large enough to get in and out, and a vent to breathe. When the cover was closed, it was difficult for the enemy to detect the bunker.
In enemy territory, the soldier stayed in the secret underground bunker in daytime, in the night, he got out of the ground for operation.
But the disadvantage of the secret bunker was that upon being detected, it was easily controlled or killed by the enemy as they were more crowded with more advantages. Due to that, it was thought necessary to extend the secret bunker into the tunnels and .onto the ground with many secret doors to both shelter and fight against the enemy, and when necessary, to escape the danger to anywhere else.
Since then, the tunnel was born with the special significance in combat operations, working for the soldiers and people in the outskirts of Saigon - Cho Lon - Gia Dinh. 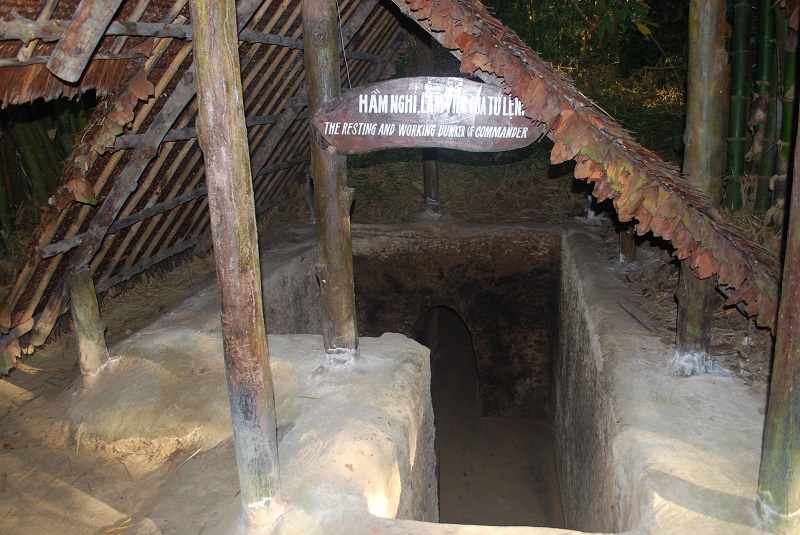 Working, resting tunnel of the Commander
In Cu Chi, the earliest tunnel appeared in 1948 in two communes of Tan Phu Trung and Phuoc Vinh An. At first, there were .only short and simple structured sections, used to conceal documents, weapons, hiding soldier’s opearting in enemy territory. Later, it spread to the communes. From 1961 to 1965 the guerrilla war of the people in Cu Chi had grown rapidly, causing huge losses to the enemy, contributing to defedt the strategic "special war" of the American. Six communes in the north of Cu Chi had completed the "backbone" tunnel. Then, the agencies and units developped branch tunnels connecting with the "backbone", an interconnected tunnel system. 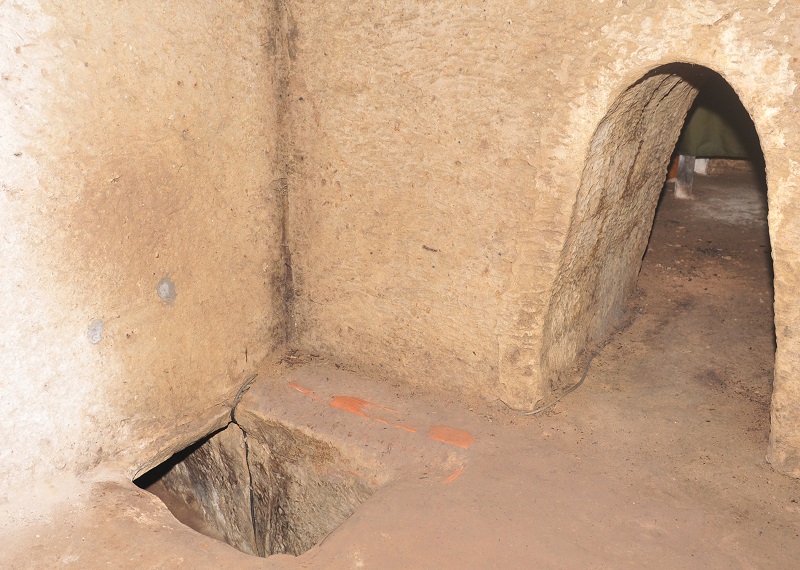 Way to the second floor of the tunnel
Entering the era of figting against American imperialism in Vietnam, Cu Chi Tunnel thrived widely, especially in the beginning of 1966, when the US used infantry Division No. 1 " Red Brother " and performed major operations named crimp, sweeping, raiding bases, and the next, putting Division 25 "tropical lightning" to establish Dong Du basement, consecutive sweeps, fiercely attacking the revolutionary forces here.
Before the fierce attack of the America - puppet with barbaric destruction war, Commissioner Saigon - Cho Lon - Gia Dinh area, Cu Chi District’s Party Committee led the people and the armed forces determined to manage to fight, destroy enemy defense and homeland security, protecting the revolutionary base areas of strategic importance, the approach and process for major attack to Saigon puppet’s headoffice. With the slogan "not an inch away, not a glass leave," the army, militia, political parties and civil authorities and the people tried to emulate digging tunnels, trenches, fortifications around the clock, regardless of any bombs, rain or sun, actively building "hamlet fight" to set "kill Americans belt" firmly into the defence, the attrition process, destroy enemies. 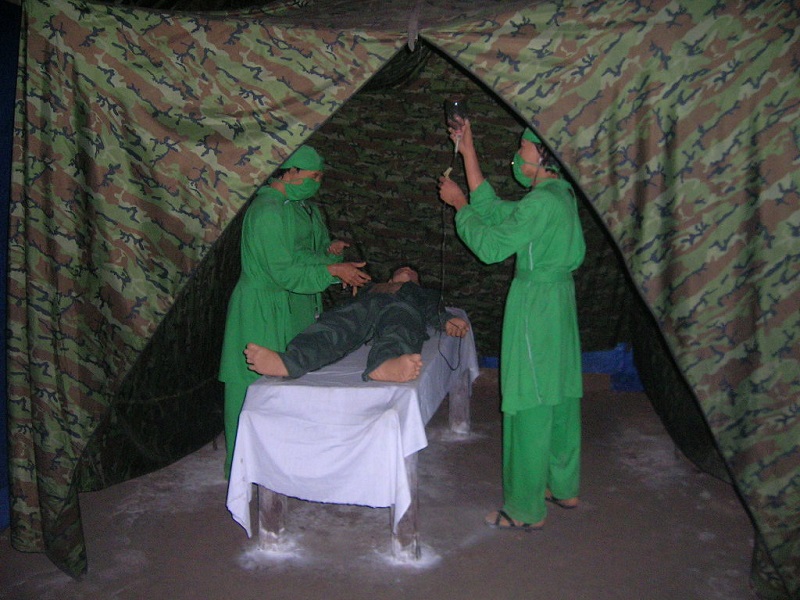 Surgery bunker
The movement of digginh tunnels increasingly thrived, stayed strong everywhere, the old and the young, boys and girls participated with excitement to establish fighting tunnel. The strength of the human will was able to any difficulties. .only by means of very primitive tools: hoe blade and the bamboo “ki”, Cu Chi soldiers and people have made a great work with hundreds of kilometers along the horizontal tunnel in the ground, connecting the hamlet together as a madic "village". .only the transfer of tens of thousands of cubic meters of soil to somewhere else to keep secret, was something extremely arduous and meticulous. Someone asked where to hide such a large land mass? The answer is that there are many ways: pump into bomb holes, submerged up into termite mounds, shed plowed fields, grow plants .on the ground ... .only a time to lose the trace. All the family in "belt" the area dug trenches connecting into the tunnels, creating continuous production to fight and to keep the village. Each individual is a soldier; a tunnel is a fortress fight. 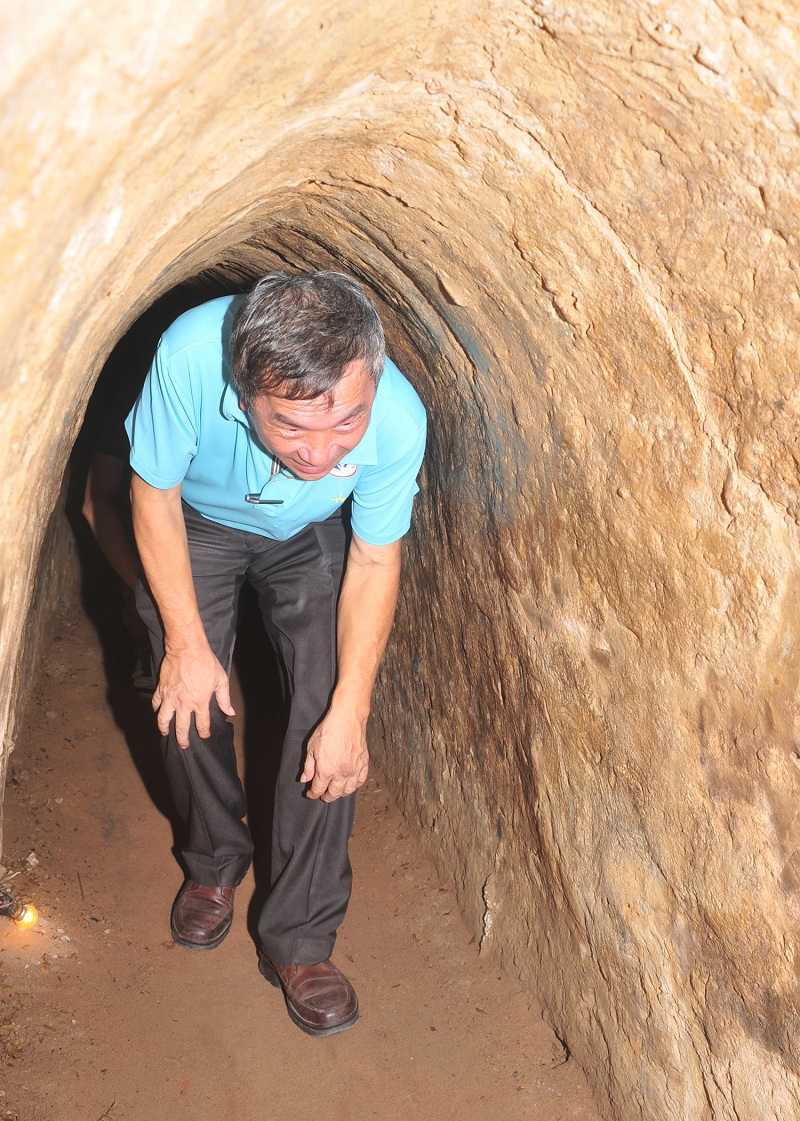 Visitors to the Tunnel
Exactly .one year after the Crimp raid, dated January 08th, 1967, the US military launched the Cedar Falls military operation in "iron triangle" area, aimed at destroying bases and destroying the revolutionary forces. This time, the tunnel system had reached the total length of about 250 km. Cu Chi Tunnel was not passive but proactive to fight in the battle with landmines left thick .on the ground, to become a daily threat to the enemy during the war.
Tunnel structure
The tunnel system runs squirming in the ground, from the "backbone" (Main Street) spreading numerous branches of diferent lengths, connecting together or independently end, depending .on the terrain. There are many branches to Saigon River, so in emergency case, they could cross the river to the base of Ben Cat (Binh Duong).
The tunnel is not too deep but is able to against heavy artillery and tanks, armored vehicles, deep combat sections and small bombs. There are structural sections from two to three floors (upstairs called the "upper", downstairs called "low"). Place up and down between the floors; there is a secret hatch cover. In the tunnel, there are necessary stop points to prevent the enemy or toxic chemicals sprayed by the enemy. There are narrow passages, pretty small to go through. Along the tunnel, there are vents discreetly disguised and carved up the ground with many secret doors. Countless doors are structured as combat, sniper gun emplacements very flexibly. This is the sudden t the enemy. Under the single tunnel in important coverage areas, there are jaws, nail holes, pitfalls...
Around the covers of the bunkers, there are many nail holes, mine left (called dead area), including anti-tank landmines and cluster bombs against wheels helicopter shooting down, to destroy and prevent military enemy approaching. 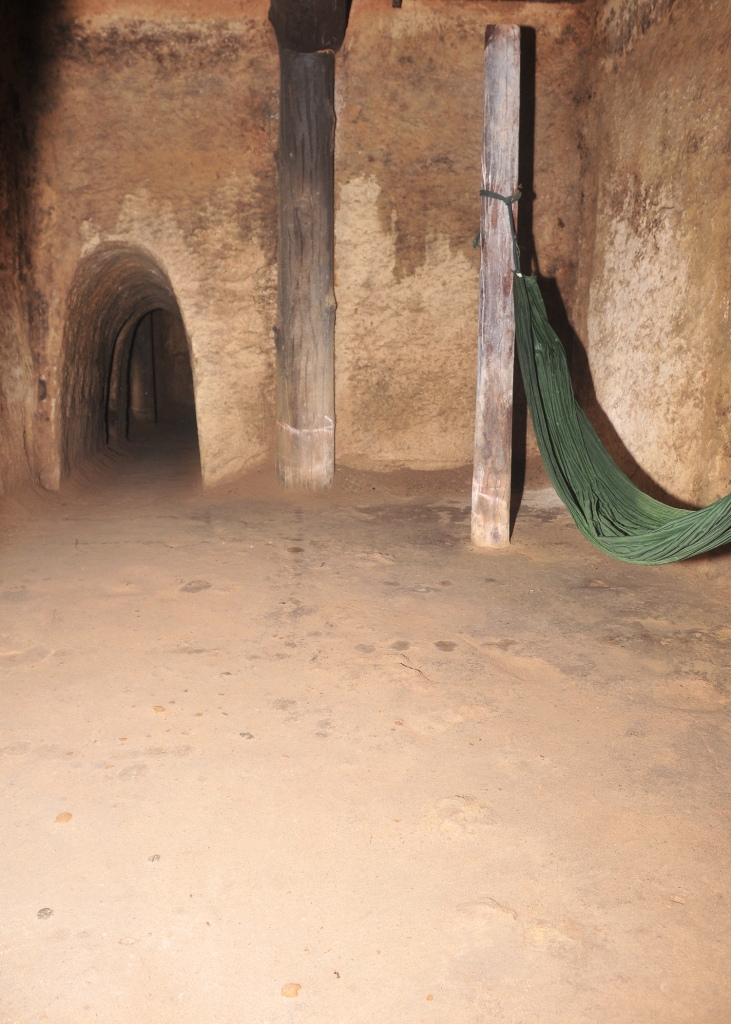