Category: Ben Dinh tunnels
Ben Dinh Tunnels is located .on the Highway 15, this is the base of Cu Chi District Commissioner. 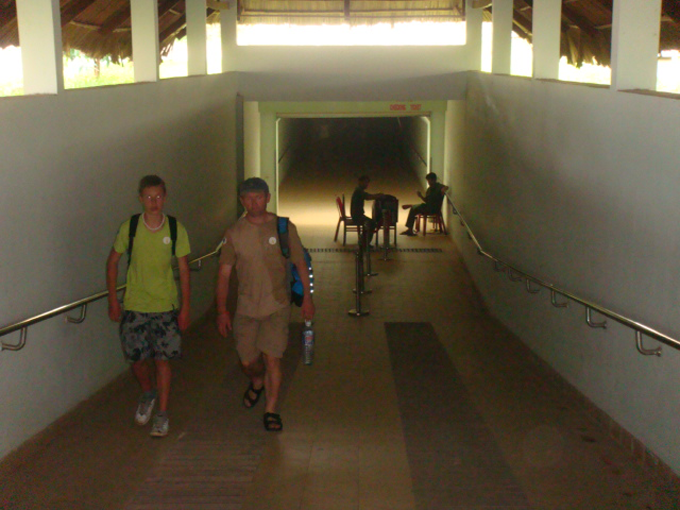 After the general uprising, by 1967, the movement of digging tunnels in Cu Chi was gradually improved and strongly developed across the district, especially in 6 northern communes. Especially, in the village of Duc Nhuan where there were tunnel systems for 4 continuous hamlets: Bau Tran Hamlet, Xom Bung Hamlet, Ba Thien Hamlet and Ben Dinh Hamlet.
Because Ben Dinh has a very favorable terrain and the forest stretching of over 100 hectares with high land shape, the land is solid and hard to fall down and this place is located near Saigon river, in case of the enemy’s mopping –up operations, we can retreat toward the river safely. Therefore, Cu Chi District Commissioner selected Ben Dinh to be the basic base to lead and instruct the army and the people of Cu Chi in the fierce battle with the US Army from 1968 to 1975. 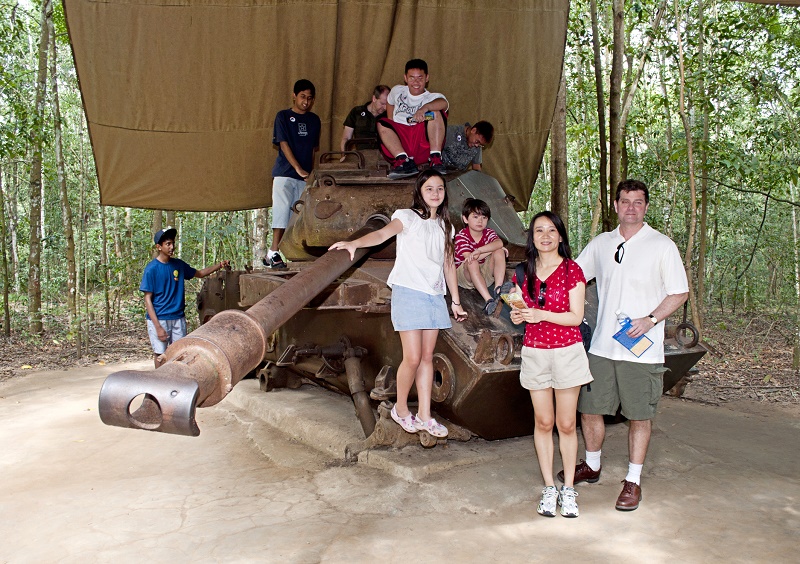 Foreign tourists take photographs beside the M41 tank
of the US army that was hit by mine of Cu Chi guerrillas -1970 in Ben Dinh
Like in Ben Duoc Tunnels, while visiting Ben Dinh Tunnels, visitors will see the documentary film in the hall and listen to the history of the development of a strategic system of Cu Chi Tunnels. In addition to the inspection of the tunnel system, the accommodation, the activities, the meeting places of the leaders of Cu Chi District Party Committee, the tunnels for making the weapons, the gallery of homemade weapons ... there is a strategic system of crisscrossed trenches with tunnels to Dong Du base, where the US Division that was nicknamed "the tropical lightning " stationed. And even more interesting, you will see the body of the M41 tank of the US Army that was caught mine planted by the guerrillas in 1970 in the middle of the forest. This is the testament to the failure of the US military .on Cu Chi battlefield when they had to face with an invisible army from the underground.

The field for Military sport shooting
On the way, the tourists will even be more excited when hearing the gunfire echoing from far distance and they will never miss the opportunity to try thrills and their shooting talent at the field for Military sport shooting. At the end of the tour, tourists will visit the area selling souvenirs to choose for themselves, for their relatives and friends the gifts that are made of the war materials such as oil lamps, lighters, ballpoint pens, strap, or sandals made from old tires and lacquer items, luxurious art goods, goods made by rattan, bamboo, leaves that are special products of the villages in Cu Chi. Besides, Ben Dinh tunnels also has a restaurant .on airy Saigon River, with the charming natural scenery that serves the special dishes of the countryside in the southeastern region and in the heroic land of Cu Chi.
Let come to Ben Dinh Tunnels to experience and feel the difference that you can never forget.