Category: News
Congly.vn - "I would like to express my deep admire for the hero Vietnamese in the struggle for national liberation with full of courage", that was the feelings of Mr. Stefan Harabin, Chief Judge of People’s Supreme Court, chief delegation of Slovakia SPC when visiting Cu Chi Underground Tunnel.

The members of the delegation had a day full of interesting experiences with underground tunnel system and expressed admiration for the intelligence and courageous fighting spirit of the Vietnamese…
Mr. Stefan Harabin and members of the supreme delegation from the Supreme Court of Slovakia had the official work and visit in Vietnam from June 02nd to 08th, 2014 for the invitation of the Secretary of the Party Central Committee and director of the SPC – Mr. Truong Hoa Binh. In Ho Chi Minh City, after the working sessions with the South SPC and SPC's Appellate Division in HCMC, Mr. Stefan Harabin and members of the delegation visited two landmarks, which are Reunification Palace and Cu Chi tunnel. With the honor to go with the delegation, I saw the thrill and excitement of the members .on the trip to Cu Chi tunnel. They .only knew this place through books before, and now they are going to that place to see, to hear and to feel all the interests, unique points of the world famous tunnel.
Upon stepping into the port of Cu Chi tunnel area, Chief Judge Stefan Harabin and his wife as well as other members of the delegation expressed their desire to visit Ben Duoc temple, where recorded the martyrs who fell, died for the country. The delegations of the Supreme Court have respectfully offered incense to 44,752 martyrs whose names were carved .on the temple sanctum. Mr. Pham Van Tien, deputy director of the Office SPC gave the delegations small souvenirs such as bandanna, camouflage hat ... so that they could have a day of "Role Play" working together as "guerrilla", exploring the tunnel system. Lady Chief Justice Stefan Harabin was very interested in the bandanna, and wore bandanna as gently.
"Lying deeply in Cu Chi underground, the tunnel system has the length of about 250km, winding and covered by the forest green leaves. From the main tunnel, there are numerous branches with different lengths, connecting to each other, even to Saigon River flowering branches, so that in case of emergency, they could cross the river to the safety zones. The tunnel has structure of 2 to 3 floors (the deepest position is 12m), with vents along the tunnel and secretly covered ground. Along with the tunnels, there are wide caves to rest after the fight. "The members of the delegation listened intently to the introduction of the guides, they constantly questioned: Why American with modern weapons could not "destroy" the tunnel? Why guerrilla forces could live and fight in such difficulties? 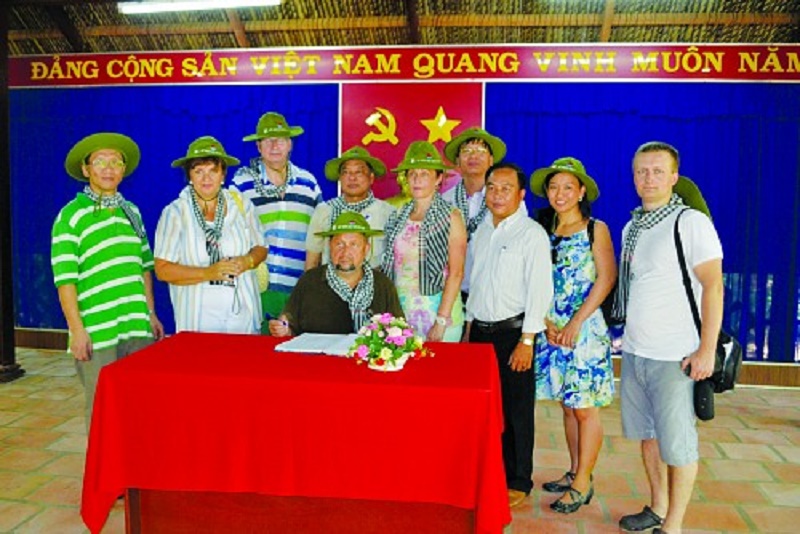 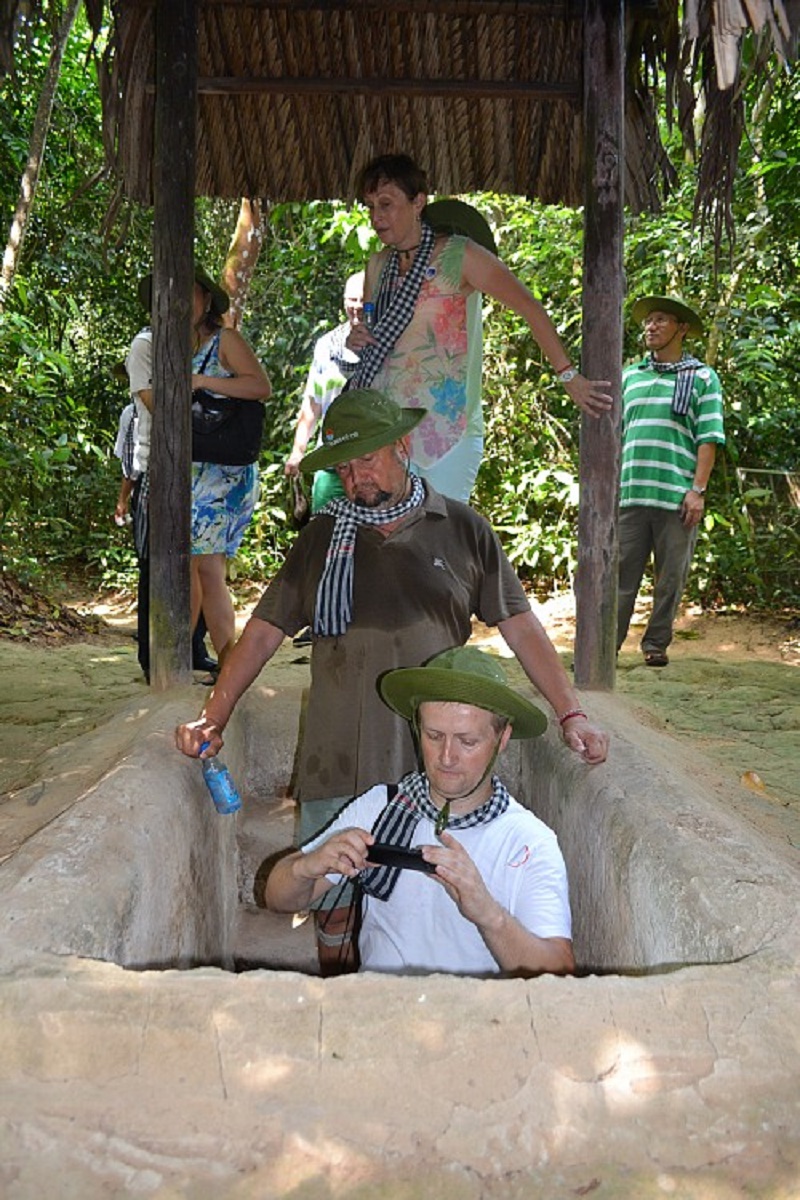 The members of the Slovakia TATC delegation explore the tunnels
The team members were excited to explore many nooks of Cu Chi tunnel. Although the tunnel is fairly narrow and it was hard to manage under the tunnel, everyone was full of excitement. Witnessed and discovered by themselves, the team members felt the extremely powerful will to fight the of Cu Chi guerrillas. Living 12m deep underground with difficult conditions, rudimentary tunneling tools, but the soldiers had created the tunnel system of three floors with a multitude of long and short connected branches, out into Saigon River. The guide, a former veteran, explained: the first floor of the tunnel is 3m under the ground, be able to against the weight of artillery and tanks, armored vehicles. The second floor is 5m under the ground, may protect against small bomb. And the last floor 8-12m under the ground is very safe. With the structure and smart camouflage, the tunnel had become a place to protect Cu Chi people and soldiers over 21 years of war. Many operations, many campaigns of the Americans were defeated here. 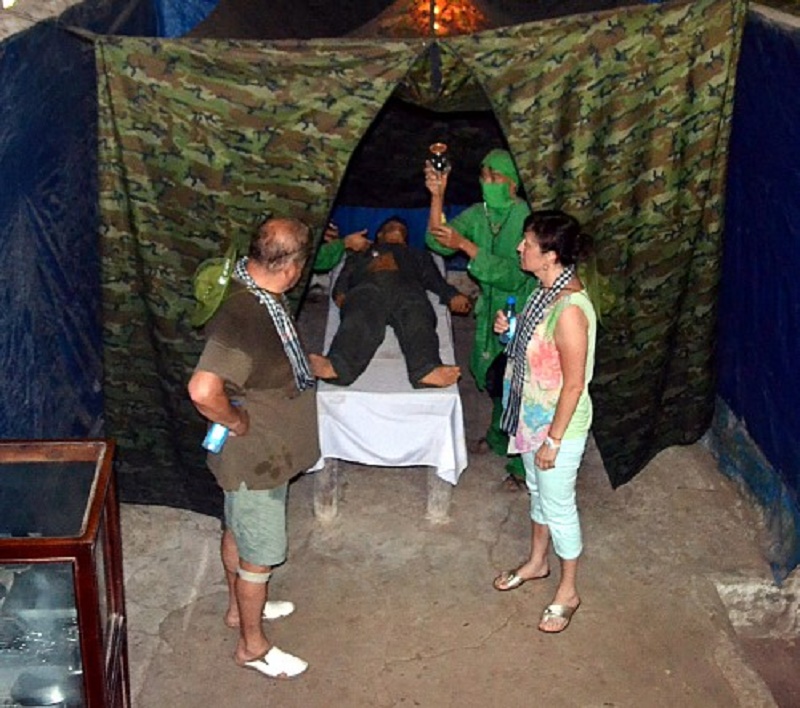 Chief Judge Stefan Harabin and his wife in medical tunnel
Mr. Stefan Harabin and his wife stopped long in medical tunnel, carefully observed each item that the guerrillas used in the past, each bunker for wounded soldiers, command bunker ... The eyes were emotional when he saw the simple emergency medical instruments but saved many of the injured and sick. He and his wife also learned the working principles of Hoang Cam stove, cooking stove hiding smoke. .one member of the group shared touchingly: "When they decided to fight in conditions like that, it meant they consecrated their lives. Determination of the soldiers are really admirable, beyond my imagination". Mr. Stefan Harabin said: In WW II, Slovakia (part of the former Czechoslovakia) was .once invaded and occupied by the Nazi. The army e forces also fought doggedly against the Nazis, but the level of hardship and fierce fighting in Cu Chi tunnel were so much more difficult. 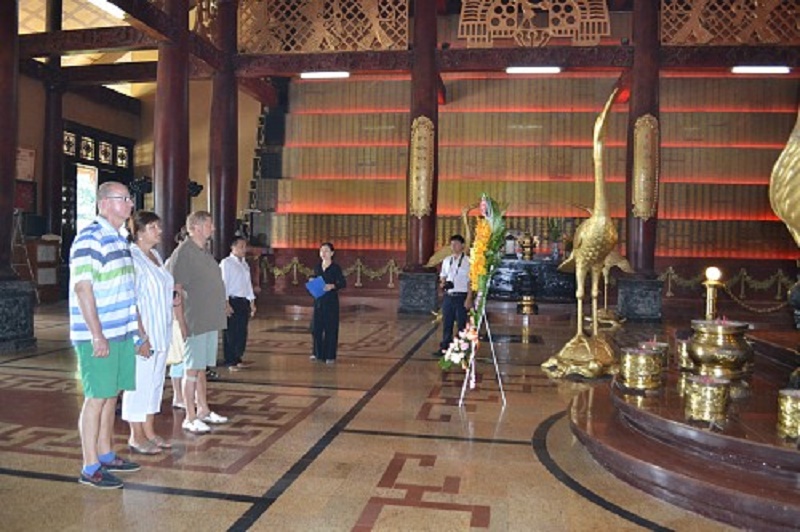 The memorial moment of TATC Slovakia members in Ben Duoc temple
The visit to Cu Chi tunnel had left deep impression .on members of the delegation of the Supreme Court of Slovakia. What they are seeing firsthand in Cu Chi make them surprised and thus, they admire more the determination, spirit to endure hardships of the Vietnamese in war period. Chief Judge Stefan Harabin respectfully wrote in scrapbook: "Delegation of the Supreme Court and Council of Judges of the Republic of Slovakia would like to express the deep admiration for the people of the hero Vietnamese in the struggle for the courageous national liberation ". The members of the delegation left Cu Chi tunnel with lots of emotion. They had the answer: Why the Vietnamese could win the struggle over 21 years of hardship.